While literacy is often seen as a cornerstone to scholastic achievement, studies show that mathematical reasoning may be even more crucial as a building block for success in school and beyond. That’s why experts say more attention should be paid to numeracy in early childhood.  Read the full article in Ed Source.

Math Skills at Age 7 Predict How Much Money You'll Make

Kids who were better at math at age seven ended up in a higher socioeconomic class at age 42, regardless of what other advantages they had.  Learn more in The Atlantic

What’s the Point of Teaching Math in Preschool?

We now know that early math skills are the strongest early predictors of children’s math achievement years later, and are related to important life outcomes such as college success.  Read the full report from The Brookings Institute.

Why early math is just as important as early reading

Research suggests early math skills are a better predictor of academic success than early reading  — but preschools aren't teaching them.  One study calculated that at preschools where kids spend six hours a day, math gets an average of only 58 seconds.  Visit Great Schools to learn more.

Math in the Early Years: A Strong Predictor for Later School Success

Young children have a surprising capacity to learn substantial mathematics, but most children in the U.S. have a discouraging lack of opportunities to do so.  Check out the full report from Education Commission of the States

When it comes to early math exposure, the research is clear — mathematical thinking early on helps “form a foundation for general cognition and learning.” In fact, children’s knowledge of mathematics in pre-K is a strong predictor of later achievement, even into high school. Read the New America article here.

Math Matters, Even for Little Kids

Everyone knows that children who are not reading at grade level by 3rd grade are fated to struggle academically throughout school. But guess what predicts later academic success better than early reading? Early math skills.  Read the full article in Ed Week 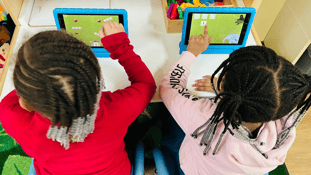